This is my Wyse Winterm S30, which despite being a thin ‘client’, has actually spent a fair amount of time serving my website before I moved on to other options.I bought this in on eBay back around 2009-10 for about $25. I had hoped that it had some local processing capability, despite being a “thin client”, and was pleased to find I had hoped correctly.

My goal became to make it a web server, and after a long period of failing attempts and dead-end research, I finally got it to run. 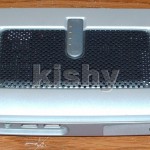 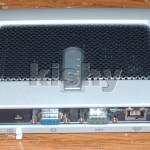 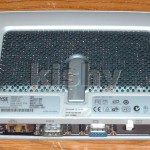 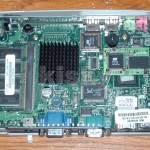 “Hosting my site from home on a Wyse Thin Client”, originally from kishytech.wordpress.org:

A while ago, I bought a Wyse Winterm S30 thin client on eBay. Unimpressive in specs (366MHz Geode, 128MB DDR333, 64MB IDE flash), but impressive in form factor, and certainly usable.

I bought it with the sole intent of running some kind of Linux on it to host my website (kishy.ca). It started to look like a lost cause when I realized this device lacks a configurable BIOS setup menu, and that the boot sequence puts the internal flash module first (optionally, network PXE can go first, configured by software). I figured there was no way to USB boot it and so largely gave up.

Fast forward a bit…I was kinda bored. I pulled the thin client out of the drawer, plugged in a USB floppy drive (containing a Win98 boot disk), and tried to boot it. I noticed the drive made a brief seeking sound before going to WinCE, which suggested to me that maybe the BIOS is USB bootable…so I removed the flash module and tried again. Success! I repeated the test with my USB/IDE bridge and a CDROM drive and found it successfully booted several items. The logical conclusion is that it could also boot from a flash drive…so who’s to stop me installing an OS on a flash drive and booting from that?

The ISOLINUX bootloader hangs up on the thin client, so I plugged the flash drive into a more conventional machine and did the install there (the minimal install of Debian). Re-acquainted myself with the Linux CLI for a bit (had a college course on it, but have never used it outside of that), figured out an irritating network issue (the minimal install doesn’t include a DHCP client, and the Realtek ethernet chip shows up as eth1 instead of eth0). Fixed those, installed my needed packages for SSH/SFTP access and a basic web server…good to go.

Despite the above, I did eventually find that the S30 has a setup menu: you must repeatedly press Delete at POST time, until it comes up. The parts about pressing repeatedly, and also about doing it continuously until the menu comes up are both critical or you won’t get into it.

The default password, if equipped, is Fireport. Although very simplistic, it offers more than enough flexibility: 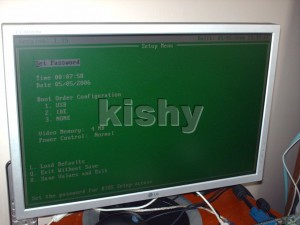 The thin client does not retain the date/time at poweroff (not much of a problem for a server, but with no UPS it’s conceivable that it will go down). For this, I’m using ntp and ntpdate (grabs the time from an internet server shortly after startup). The hardware is fairly slow, and since it’s running off a flash drive, I opted for no disk swap (the write cycles would murder the drive quickly), so performance is not the best for anything that involves “thinking”, plus my connection is kinda slow, but it seems to be quicker than the free host. Not to mention the electricity savings over running a “real” server…Wyse rates these for an average of 6.6W. I’ve confirmed it indeed only draws about 6W at idle.

These devices can be found at very reasonable prices from time to time, so it’s definitely a project worth looking into if you’ve wanted to do something similar. If nothing else, I can stop depending on Imageshack to randomly delete my images…and a free host who may go down at any time…and I get further Linux CLI experience in the process.